On August 20th, we lost one of our heroes.

Elmore Leonard—87-years-old and at work on his 46th novel—died after suffering a stroke on July 29th.

Marilyn Stasio eulogized him on the front page of the New York Times. Writers, critics, reviewers, readers, and academicians throughout the world have paid tribute to his exquisite style, his elaborate and quirky plotting, the incredibly memorable characters he created, and the sheer firepower of everything he wrote. He will be remembered as one of the truly great writers of his time.

I have a different memory of Elmore Leonard, though.

It’s a memory from twenty-two years ago, in August of 1991. My first novel had been out for just a little over a year and my second was on its way. When my agent sold that first book in late 1988, I decided I owed some karmic payback, so I contacted some folks at the Tennessee Department of Corrections. I had to jump through some hoops, but eventually I became a volunteer teacher at the old Tennessee State Prison, which was more commonly known as “The Walls.” The place resembled a medieval fortress. It closed in 1992 and is now used as a movie set.

For four years, for three hours on Monday night, inmate writers and I gathered in the schoolhouse and workshopped our writing. In the beginning, I had the misguided notion that I had something to teach them. The reality was I learned a hell of a lot more from them than they did from me.

One Monday night, I announced to the group that I was cancelling class the following week. A couple of the guys asked why…

“Elmore Leonard’s coming to town for a signing at Davis-Kidd,” I said. “And there’s no way I’m going to miss that.”

You’d have thought I told them Jesus Christ was climbing down from the cross. There was a ruckus like I’d never seen among this usually sedate and almost intellectual group of guys.

Point taken. So in one of life’s what the hell moments, I called Elmore Leonard’s publisher the next morning and got someone in publicity to take my call.

“Elmore Leonard writes about criminals,” I said. “How’d he like to meet the real thing?”

That Monday afternoon, I picked Mr. Leonard up at his hotel and drove to the prison. I was amazed at how soft-spoken, even unassuming, he was. There was no trace of ego in him, or bravado, or the macho sensibilities you’d expect from a guy who wrote about hard-assed, bad-assed criminals and got rich and famous doing it. He wore jeans, a blue dress shirt and a jacket. Just a regular guy…

And the guys in the writing workshop loved him. He spent the whole afternoon talking to them about the writing life and the writing business. He asked them about their work and listened to their stories. He treated them with respect and dignity. For one short, sunny afternoon in August, they weren’t inmates anymore; they were writers, swapping war stories with one of their own.

Later, I drove him to the Davis-Kidd Bookstore, where a huge crowd attended his book signing. After that, a group of us all went to dinner. I got to sit next to him and while I can’t remember in any detail what we actually talked about (it was twenty-two years ago), I remember it as one of the most pleasant conversations I’ve ever had with another writer.

Later, he wrote me a handwritten letter thanking me for the day and signed it “Dutch.” That letter and a photo of us all at the penitentiary are framed in my home office. They’re two of my most treasured mementos.

So that’s how I remember Elmore Leonard. Yeah, he was one helluva writer. But he was also a really nice guy.So long, Dutch. We miss you. 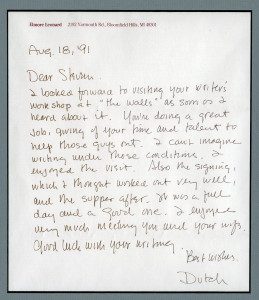 2 thoughts on “On The Passing of Elmore Leonard…”