The newsletter editors at Novelist’s Inc. asked me to write an article on getting started in audiobooks. The article’s just been published and they named it the social media article of the month, so it’s available on the website as well. Take a look!

Getting Started in Audiobooks

I’ve just completed work on my first real audio project, the spoken-word edition of my short story, Goldfarb’s Red Scarf. This story was published in an anthology released a few years ago called Cast Of Characters, whic h was a collection of short work published by writers in Novelists, Inc.

This was an experiment and a learning experience. I eventually want to bring out audio editions of my novels through the Spearhead Press imprint.

Because this was a first project, I’m giving it away for free as a thank-you for subscribing to my sporadically published newsletter. If you’d like to hear it, just go to:

And don’t worry about having your Inbox inundated. I don’t have the time or the bandwidth to publish a lot of newsletters…

USA Today Best-Selling author Patricia McLinn interviewed me recently on her podcast Authors Love Readers. We had a wonderful chat about writing, reading, publishing and all things funny and mysterious.

Patricia and I had only recently been introduced, but we discovered that we have one thing in common: we’re both past-Presidents of Novelists Inc.

The interview was released today and can be heard on the podcast website at http://authorslovereaders.libsyn.com/

Or if you prefer, it’s available on iTunes at: https://apple.co/2r0Ry7q

Steve Explains The Reality of Publishing In 12 Short Minutes

And why he finally decided to walk away from it.

We love feedback! Hit that “Leave A Comment” button above and let us have it!

I just wanted to share this with everyone. Last night, we went to the Southern Festival of Books reveal party. This is where they announce the authors who will be appearing at the SFB in October…

The event was held at the wonderful Parnassus Books in Nashville, and while there, I saw the print edition of Dead Folks’ Blues.

It’s the first time I’ve seen a real print edition of one of my books in a real bookstore in ages and, brother, did it feel good… 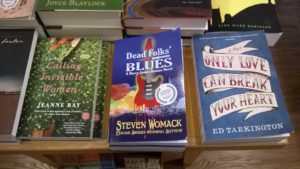 If you have any problems getting this to play, you can download it directly: 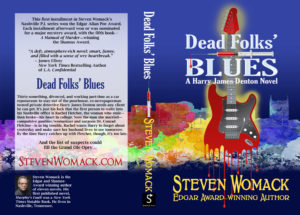 Thirty years ago, I sold my first novel, Murphy’s Fault. It sold in late 1988, but it didn’t come out until 1990. I remember being so thrilled when Mill’s Bookstore (a long-gone local independent) agreed to give me a book signing.

I sent out something like a hundred invitations (by snailmail, no less) and dozens of phone calls. Invited every friend, every family member… I was one of the founding members of the Tennessee Screenwriting Association, so everybody in that group got an invite.

The signing was on a Sunday afternoon. I was terrified. What if nobody showed up?

When I got there, I was thrilled. There was already a crowd forming. The staffers at Mills (one of whom, Michael Sims, would go on to become one of my closest pals and a writer whose success far eclipsed mine) were already bringing out more folding chairs. My parents, my brother and sister-in-law, my grandmother all came…

It was an amazing day. Mills had optimistically way over-ordered, but every one of the 130+ copies they had on hand were snapped up. By the time the signing was over, Michael and Ron Watson were reaching into the front windows to pull out display copies for people.

I was drained, exhausted, spent, but it was one of the best days of my life…

Then reality hit. I’ve never had a signing like that again, to this day. Nowhere near it…

In the 90s, when I was really working this business, I went  on a bunch of book tours, almost all self-financed. Most of those signings were like the one that Sharyn McCrumb and I did at a Little Professor Bookstore in Birmingham, where we sat next to each other at the front of the store during a weekday lunch hour.

Most of the people who came in thought we worked there. I remember someone asking me what the special of the day was in the cafe…

So when I read Tom McAllister’s article today on a website I’ve just discovered called TheMillions.com , it really put me in mind of those early days. And how much I thought the world would beat a path to my door because I’d written a freakin’ book…

Every writer needs to read this. Take a look:

Thanks to everyone who participated in the eBook giveaway for Dead Folks’ Blues! It was so much more successful than we ever imagined. The random giveaway was set up on Amazon.com so that every fifth person who followed me on Twitter got a free eBook. They were all gone in a couple of hours!

Thanks again! It was so much fun that we’ll do it again soon!

If you haven’t had a chance to read the Harry James Denton books yet, here’s your chance to start. Spearhead Press is giving away 25 free ebook copies of Dead Folks’ Blues. Follow me on Twitter before November 23, 2017 for a chance to win. Click  here to enter!