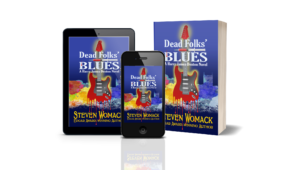 Dead Folks’ Blues was a real turning point in my career as a writer. Like so many of my books, though, this debut novel with former investigative reporter/private detective Harry James Denton saw the light of day almost by happenstance. The truth is, Dead Folks’ Blues started out as a failed novella.

It was the mid-80s, and I had been working in publishing for almost a decade after leaving the newspaper business. I wasn’t an editor, though; I’d worked mostly in art departments, as a typesetter and paste-up artist (boy, talk about old school), I worked for a publisher in New York City and then decided I wanted to move back home to Nashville. I found a job with a local publisher, starting their in-house typesetting and art department. I ran that for four years when the suits decided it wasn’t working for them and closed my department, laying me off and the really nice folks who worked with me…

It was one of the few times in my life I turned what-should-have-been-a disaster into something good. I made an offer to buy the assets of the art department. They took my low-ball offer, then I turned around and sold all the equipment for five times what I paid for it.

I decided to pursue my dream of writing full-time, so used that money to pay the bills.

I experimented with writing a number of projects that I hoped would be more commercial and saleable. I wrote a romance, of all things, that got me an agent but never sold. I dug out a long-rejected, unpublished novel called Murphy’s Fault and started rewriting that.

And I also took a stab at a mystery, writing a novella called Murder At Vanderbilt. It was about eighty pages long and starred an investigative reporter who played a joke on his boss and got fired, so he decides to see if his skills as a reporter could turn into a career as a private detective.

I couldn’t sell it anywhere. I offered it to a local magazine for free and they turned it down!

Get it? I literally couldn’t give the damn thing away!

So I shelved it. Fast forward a couple of years and I finally get published by St. Martin’s Press. A local writer in West Tennessee, Deborah Adams, cold calls me and tells me her first novel’s being published by Ballantine Books. Would I mind giving her a blurb?

I was flattered and delighted. Anything to get my name on a book, even if I didn’t write it…

I gave Deb’s book a really nice blurb, and the next thing I knew, her editor at Ballantine, Joe Blades, called me to thank me. He mentioned that Deb had given him a copy of Murphy’s Fault and he really liked it, so much so that if I ever wanted to work together, I should give him a call…

So here I am, with fifteen years or so of rejection slips behind me, and an editor at a major New York house says “If you ever want to work together, give me a call…”

I’ll have you something in thirty days I said.

Joe laughed and suggested that perhaps I should give myself a little time. No, I insisted, I’d have him something in thirty days.

Then I hung up the phone and thought: What the hell do I do now?

I thought of my unpublished novella, took it out, rewrote it as a book proposal and sent if off to Joe inside the thirty days. He liked it, bought it, then I wrote the rest of the book and turned it in.

Months later, after pub date, he called me and told me the book had been nominated for an Edgar. Ballantine flew me to New York and darn if the book didn’t win. Sue Grafton handed me the little statue, which is still sitting on the bookcase across from my desk in my home office.

There’s a lot more I could say about Dead Folks’ Blues, but it can wait until another time. Two quick things, though.

First, I’ve never had much luck getting blurbs. For some reason or other, famous best-selling writers have never been willing to say nice things about me. I’m not sure I buy much of the blurb thing anyway. But I’ve always been grateful to James Ellroy for the wonderful blurb he gave the book, which I’m equally sure he has no memory of ever doing…

Second, Dead Folks’ Blues and the other Harry James Denton novels sold in several other countries, including U.K., Germany, and Japan. But for some reason or other, I’ve always been proudest of the French edition. Gallimard’s Serie Noire imprint bought the book.

I don’t know why this particular edition has meant so much to me. Maybe it’s because Gallimard is the same house that published Raymond Chandler a few decades ago…

This edition is still available from Amazon France. Click on the cover to take a look.

I’m thrilled that Dead Folks’ Blues has been reissued under the Spearhead Press imprint. I hope Harry finds a whole new audience and while Spearhead Press republishes the original six Harry James Denton novels, I’m already planning to bring Harry back to life in a whole new set of adventures.