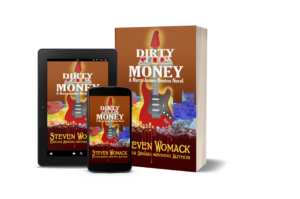 Dirty Money is so closely based on real life events that it’s almost a thinly disguised true crime book. And it all started with a fellow named Mike Price, who was one of the most fascinating people I’ve ever known and who I was fortunate–for almost twenty years before he passed away–to count as a close friend.

Mike was a comedy writer, stand-up comedian, teacher, and serial marrier. He had eight ex-wives–a record that a few friends have accused me of hoping to someday break.

“With Harry James Denton, Womack has created one of the most interesting detectives to surface in a long time. Womack is an excellent writer who knows how to merge character with plot, and fact with fantasy. Fans of Harry James Denton will hope to see him again and again. ”
—Bookpage

He was the funniest guy I’ve ever met in my life. We became friends by accident in the early 90s. I met him at a screenwriters party in Nashville and then, just by chance, ran into him a week or two later in some retail computer store that’s long since gone out of business. He had bought Microsoft Word, then couldn’t get it installed and working right and was just giving the poor salesguy holy hell…

I tapped him on the shoulder. He turned around and growled. I reminded him that we’d met, told him I was pretty good with MS-Word, then gave him my number and told him to call me if he had any questions or if there was anything I could help him with.

He called me about thirty-five times over the next two days. I finally went over to his apartment–he was living in a friend’s garage–and got it working right.

That was the beginning of a beautiful friendship…

Someday, I may write more about Price, but where he ties into Dirty Money is that when he married his eighth wife, the two of them moved back to his hometown of Reno, Nevada. The marriage lasted about a year-and-a-half or so. When she left, Mike stayed.

He kept asking me to come out and see him, but I never had the time or the money at the same time. Finally, I said “Find me a story to write! Then I can write it off as a business expense…”

He called back a few days later. “Ever heard of the Mustang Ranch?” he asked.

The Mustang Ranch was, of course, the most famous brothel in the world. Located in the desert outside Reno, it was completely legal, Storey County being one of the two counties in Nevada where prostitution is allowed.

So Mike told me a story.

The Mustang Ranch was owned by a fellow named Joe Conforte. He ran the place with his mother’s help. Sort of a family affair, I guess…

Anyway, Joe didn’t pay his taxes and when he got in trouble with the IRS, the Feds seized the Mustang Ranch in the tax dispute. This was all reported in the media.

What was not reported in the media, Mike told me, was that the Feds continued to run the Mustang Ranch as a government-owned, profit-making enterprise. They appointed a local attorney to adminster the <harrumph> affairs of the place.

Sort of puts a whole new slant on getting screwed by the government, doesn’t it?

I thought this was the funniest story I’d heard in years. Mike offered to drive out the Mustang and check it out. A few days later, he called back and told me he’d interviewed the government-appointed manager of the  Mustang Ranch. Mike told him he had a friend in Nashville who was a writer and wanted to base a story on the real life case of the Mustang Ranch.

The lawyer invited me to come out and see the place, then reached into his desk drawer and handed Mike a little gift for me. When Mike showed it to me later, I realized it was, for lack of a better description, a coupon:

Even if I’d been inclined to use it (which I wasn’t), how could you ever give up a memento like that?

A few weeks later, I got on a plane to Nevada to research the book and fell in love with Reno. And I got a tour of the Mustang Ranch:

It was a fascinating place to set a book, but that’s all it ever was…

So in Dirty Money, Harry drives to Reno in his tired, old Ford Mustang. Marsha has left Nashville and gone their to have their daughter and Harry has fantasies of reconciling with her. While in Reno, he gets hired to investigate a money-laundering operation at the Mustang Ranch. He gets a job there as a maintenance man. When one of the Mustang girls is murdered, Harry’s the prime suspect…

At the end of the book, Harry becomes a father, which is what I did the year Dirty Money was published.

From time to time, I’ve been asked why I left the Harry James Denton series behind. Truth is, while every one of the books was nominated or won a major mystery award (Dirty Money was nominated for the Shamus Award), the books never broke out the way I hoped they would. And I’d begun to lose faith that they ever would unless I moved them to another publisher.

In 2000,  I began trying to move the books to a place where they might have more sales potential. Unfortunately, by then the publishing industry itself was changing. It was harder and harder to survive as a mid-list writer, which I’d been doing for a decade.

And as I said, I became a parent. Things like health insurance and a steady paycheck suddenly became more important. When I was offered a full-time teaching gig at a film school in Nashville, I figured I’d better take it.

Ever since, I’ve been struggling to get back to life as a full-time writer. Now it looks like that may be possible. All six Harry James Denton novels have now been published in Ebook editions from Spearhead Press. The trade paperback editions are in the works.