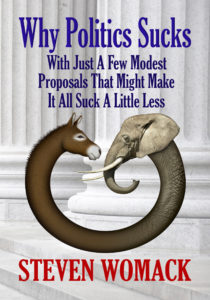 Why Politics Sucks With Just A Few Modest Proposals That Might Make It All Suck A Little Less is a labor of love more than anything else. As I wrote in the Introduction, the 21st century has not been kind to most of us. The worst economy of our lives, endless wars, and a political system that seems more corrupt and dysfunctional than ever. Many of us feel disconnected, abandoned, and left behind in this new century. This anger and resentment may very well explain both the rise of Donald Trump on the right and Bernie Sanders on the left.

We all just want to throw the bums out and start over again.

Why Politics Sucks is a short book–a chapbook or “broadside” really–that is intended to be a chapter in a longer book. When I came up with this idea and pitched it to my former agent, she told me it wasn’t my “brand” and that she didn’t know how to sell it. So I decided it was time to step off and do it myself. Writers can do that these days…

So here’s a longer description from the outlets:

“We’re Americans. We have the best government money can buy.”

With these words, Edgar and Shamus Award-winning mystery writer Steven Womack begins his investigation of one of the greatest crimes ever committed against the American people: the American political system.

The first in a series of eight “broadsides” examining issues in contemporary American life, Why Politics Sucks is a hard look at our dysfunctional, thoroughly corrupt, inefficient and broken political system. Contemporary politics, according to Womack, has descended into a cesspool of influence buying, lobbying, and pandering to the worst instincts in our national psyche. Our political life has never seemed more toxic, angry, bitter, and out-of-touch with the realities of American life. Our infrastructure decays, our children fall behind the rest of the world in education, the middle class disappears, while the poor, sick, and elderly are abandoned to survive as best they can. Meanwhile, the corporations, the connected, the powerful and the wealthy have literally raced to outbid each other for control of what should be our government.

As Womack reveals, politics has never been a pretty business. From the earliest days of the republic, politicians, legal scholars, and ordinary citizens have struggled to even figure out what corruption is. How does a democracy exist when it is for sale to the highest bidder?

All is not lost, though. Womack offers, as the subtitle suggests, a few modest proposals that might just turn things around and make politics suck just a little less.

or you can go Home…